The History of Maryhill 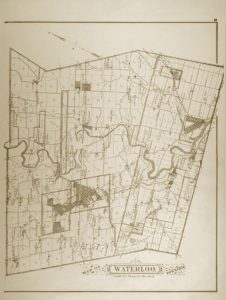 In 1826 Mathias Fehrenbach and Joseph Scharbach arrived from Baden, Germany and acquired lands to the south of the village. They were followed by Gottlieb Brohman and Joseph Lauber from Alsace. The Weilers, which included the father, Ignatius (1767-1840), his son Andrew (his wife and their three small children) and sons Joseph and Ignatius, and daughter Maria Elizabeth of Unzhurst, Baden crossed the Atlantic in 1831 aboard the Duquesne ship to be among Maryhill’s founding families. Evidence points to a fourth son, Xavier, already being in Maryhill, possibly crossing in 1829. From 1827 to 1840, of the 48 pioneer settlers to Maryhill, 36 were from Alsace, France and 12 from Baden, Germany.

In 1832 the first school was erected and served on Sunday as a church. This building had the distinction of being the first Catholic Church north of Dundas. 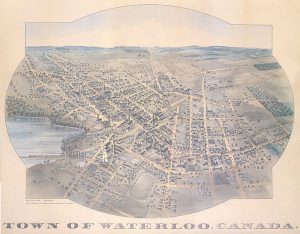 According to the 1837 census there were 69 families with a population of 307 persons in ‘Rotenburg’ later called ‘New Germany’. German language newspapers sometimes referred to it as Neu Deutschland. The name was changed to Maryhill on February 10, 1941 at the request of the Canadian Post Office. There is a ‘New Germany’ in Nova Scotia, and apparently mail from overseas was being misdirected. The Canadian Post Office officials suggested two names – “Wavell” after a British General in Egypt and “Gort” after a Commander in the British Forces. The community met under the leadership of their parish priest, Fr. Francis Diemert, and chose the name Maryhill with ‘Mary’ chosen to represent the deep rooted Catholic faith of the community and ‘hill’ referring to the geographic feature that is prominent in the village.

Prior to 1972, and the formation of the old County of Waterloo into Regional Government, the village fell within the boundaries of the Township of Waterloo. It is now part of Woolwich Township.