This year St Boniface Catholic School celebrates its 120 th Birthday. But our school dates back to 1834. St Boniface is the oldest Roman Catholic school in the present Regional Municipality of Waterloo (formerly Waterloo County) still in existence. It is believed that as early as 1834 New Germany had a school – probably doubling as a Church. In 1843 land was transferred from Lucas Zettel to the commissioner of common schools for the construction of a public school. The original deed had specified “for the Roman Catholic inhabitants,” but this was crossed out because the land was for a public school and they could not prevent non-catholics from attending. This was a two-room structure made of red brick. In the 1851 census it was listed as thirty by thirty feet. In the winter over one hundred students attended, learning German, English, arithmetic, writing, reading and geography. This school was located at 1366 Maryhill Road. Construction of a larger school began in 1886 and by December 1st of that year the building was blessed and its doors opened to scholars. On January 2, 1882, the School Sisters of Notre Dame, Sisters M. Michael, M. Evangelista and M. Begga arrived to teach in our school and assist the priest. The first lay teachers were Theobald Wadel, Jacob Leyes (who married Caroline Brohman), Mr. Gforerer and Mr. Troy. The nuns taught the younger children. By January 7, 1884 the Sisters had taken over the boys’ school as well. In September of 1890, the school trustees, during the absence of Father Foerster, hired a male teacher, Mr. Louis Kraemer, for the older boys. This move was opposed by Father and many ratepayers. In 1895 a vote was taken at the August school meeting to decide whether a male teacher was to be hired for 1896. Not one person voted in favour; therefore the Sisters again took over teaching the older boys. In 1898, once again the community erected a new [ our present] school. The old school was dismantled and sold when the new school was completed. The final result was a two-storey brick school thirty-six by sixty-four feet. It consisted of four well-lit and ventilated classrooms, two halls and cloak rooms. Classes began there on the 16th of October 1898. On June 19th, 1899, the children were called to school by the new bell for the first time. This bell now stands on a special cairn between the school and the Edward Halter Home. The school was surrounded by an immense playground, which was bordered by maple and evergreen trees. Former students have fond memories of building leaf houses in the fall when the maples were losing their leaves. 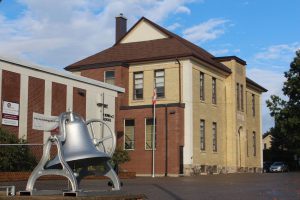 In 2018 St Boniface CS celebrates its 120th birthday.  We are working to create a partnership with the school by seeking involvement of students .  In 2016 we established a Grade 8 History Prize for a deserving graduating student.  Curriculum based tours of Halter House are also available upon request for school groups.